Walking in the footsteps of my ancestors…

Not last Sunday but the Sunday before, my boyfriend, Tom, his grandparents and I went on a very important and highly anticipated trip to Fleetwood.

I’m from Birmingham, whereas Tom and his family are all from Bolton. Although I’m a proud Brummie, as an attempt to fit in with my in-laws, I often mentioned to curious people in the pub enquiring about my accent, that my great grandma was actually from Fleetwood, thank you very much. And ever since revealing this fact, Tom’s grandad, Brian, has been adamant that he would take me to Fleetwood to show me the delights of a Lancashire seaside town and more importantly, so that we could find Freda’s (my great grandma’s) house.

This excited me greatly. I love anything to do with family trees, social history and generally finding out about my ancestors. I feel very much connected to and a product of my predecessors. I want to know what they looked like, where they lived, and what they spent their days doing. I might never had met Freda (although arguably I did, as my mom was pregnant with me when she died), but for some reason, I still feel like her flesh and blood (sounds a bit gruesome… but I mean it in a nice way!).

My mom has lots of lovely memories of her grandmother and the sayings that she had – one being “funny onion” (to be used as you might affectionately call someone a “muppet” or a “plonker”) – it has a nice ring to it, don’t you think? This is what I mean about feeling connected… throughout the years and generations and different cities, Freda’s sayings have remained constant and are now in my own everyday vocabulary… pretty amazing when you think about it.

What with life and being busy and all that, a couple of years has passed and we hadn’t yet got round to making our trip up to Fleetwood. But then a couple of Friday’s ago, Brian suddenly decided that this was the weekend, and that on Sunday, we would, without fail, be going to Fleetwood. And so it was arranged – we were to be ready at 10am and have Freda’s address to hand. Luckily, I had got the address from my great uncle Harry (Freda’s eldest son) months before – 20 Ash Street. So with that knowledge and with trusty Google Maps on my phone, I felt prepared.

At 11am on a Sunday morning, Fleetwood is a ghost town. There was a slight dampness in the air (although the sun did come out later on) and a bit of fog as well, giving the town a slightly washed out feel. There was nobody about apart from two old ladies (wearing hairnets and aprons) getting their washing done in the laundrette, and a handful of people in the arcade and the Ferry Cafe.

The cafe was an experience in itself…

We went to one end of the counter to order food (Tom and I had a bacon barm each) and they gave us a handwritten ticket with our order number on. We then swooped down to the other end of the counter to order any drinks (a pot of tea for two) and to pay. Once we paid, our ticket was stamped and returned to us. When our food was ready, our order number (in our case 96 – this was a couple of weeks ago now so it must have made a big impression on me!) was called through a microphone that was hanging over the counter – it was a bit like something a rapper would have used in a 90s music video… I half expected the staff to begin a flashmob whilst I was eating my bacon barm.

After the cafe, we headed out to the seafront for a stroll and then to get to the task at hand, finding Freda’s house. What with Google Maps, we found it quickly and easily. As we turned down Ash Street, I genuinely felt excited. We counted down the doors, with each step getting closer and closer to where Freda and her family built lives and memories. You’d think I was about to see Beyonce, not a modest, ordinary terraced house, but what can I say, I’m a proud history nerd.

Now, for some, it may have been a little underwhelming. The redbrick terraced house looked like it needed some TLC. Brian thought that it was empty, and I think was probably right. But with a lick of paint, some colourful new curtains at the windows and a general tidy up, the house would breathe once again. My guess is that it has been rented out for a long time and hasn’t had any proper attention in years – a bit like a student house. I wonder what Freda would have thought of the ugly plastic front door? (I have recently realised that I’m a bit of a door snob, I must admit.)

Brian suggested that we had a nosey at the back alley to see if we could get a better glimpse of the inside of the house. Unlike the house, the alley looked as it hadn’t changed much in decades. Its old, uneven cobbles were intact, and many of the original brick back walls were still standing. 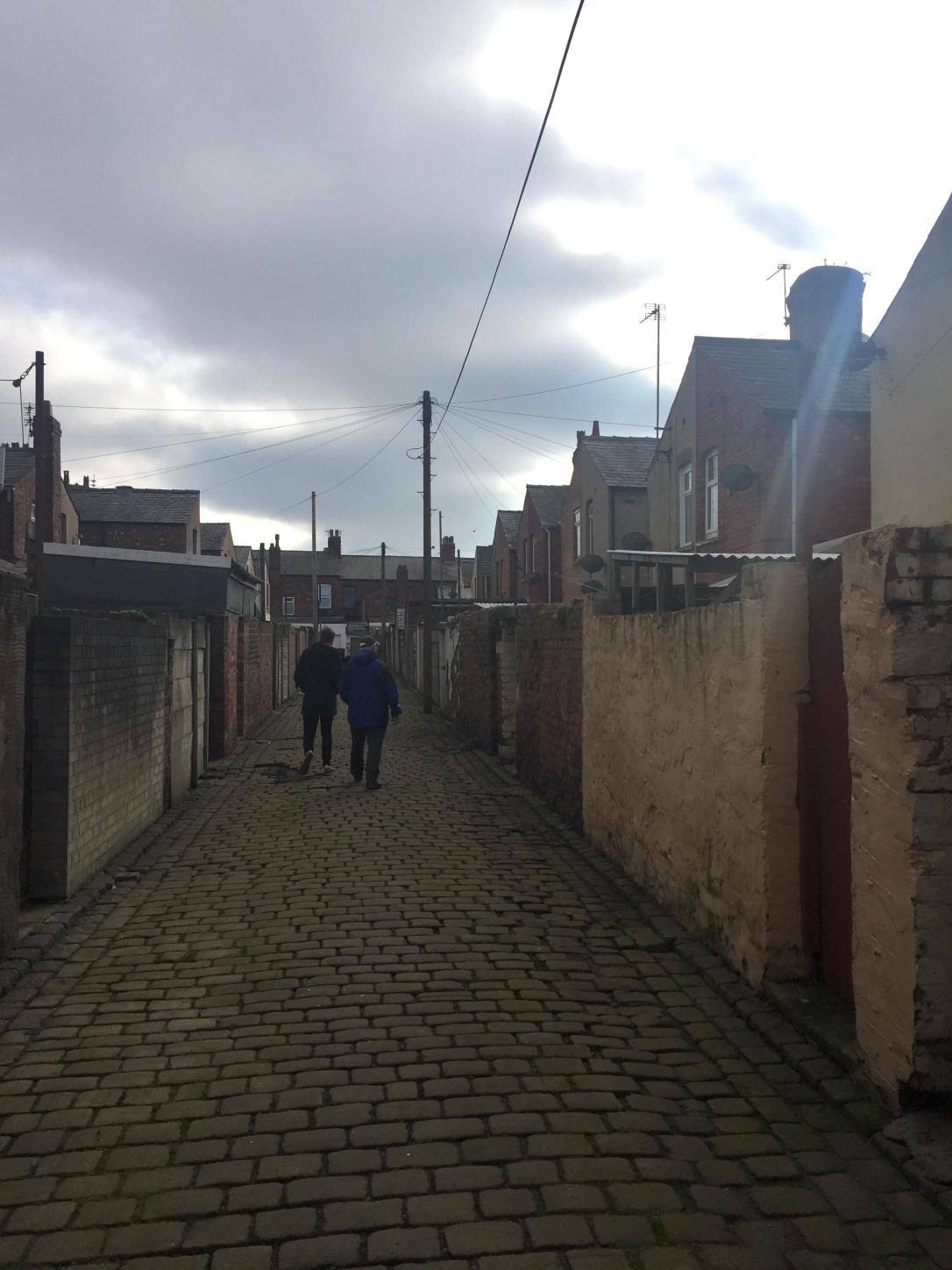 Again, the yard of Freda’s house looked a little sorry for itself. But that didn’t prevent me from conjuring up mental images of a washing line spanning the yard, bowing under the weight of the clothes of Freda and her five siblings. I bet Freda, Annie, Christopher, Alice, Jennie and Thomas stepped on the same cobbles that I was standing on countless times. The stones might be warn down from years of being trampled upon, but they were the same nonetheless. Maybe I’m romanticising a bit (something I do tend to do about the past), but I could picture the siblings playing hopscotch and skipping down the long stretch of alleyway, hair streaming behind them and the sound of seagulls above them. I felt a certain magic, a feeling that I can’t quite articulate, by being in the same physical space that was once my ancestor’s domain.

I find it so hard to comprehend that people – real, living, breathing people, live such vivid lives, full of emotions and activity… they have unique personalities and spirits and souls, meaningful relationships and careers – and then , they just… go. And one day, you and I will just go too. I feel as if I owe it to my ancestors to honour their colourful lives by remembering them, talking about them and by trying to understand them. And I don’t think any of us could deny that we would like to think of our own descendants doing the same for us.

I wish I could visit all my ancestor’s houses, but unfortunately, many have demolished during the slum clearances of the 50s, 60s and 70s. I’m glad that I got to Freda’s house whilst it’s still intact, and I hope it remains intact for many years to come! I also hope the house gets the attention it deserves and that a new family will soon occupy its walls and breathe life and energy back into the bricks and mortar.

Thinking about my family of the past reminds me that life is temporary and that although we are in our present, and that our own present feels like the only time to have ever existed, when Freda was alive, she was in the present too… her present.

So, make the most of your present and live life vividly.

View all posts by Jane Newby